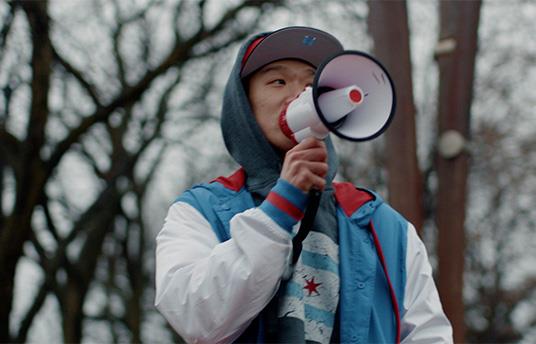 This film is screening as part of Uncertain Futures II programme. Buy your tickets here .

BJ, a young Korean-American hustler, tirelessly runs throughout the city of Chicago making hard-earned sales out of his infinitely convenient “mobile gift shop”. This endearing short is a story about our struggle with significance. In a culture that constantly questions if we’re living our biggest and best lives, this film shows us someone who chooses the alternative. Even though he may live “small”, every day is an adventure for BJ—coming across unique situations constantly and enjoying every moment life has to offer.

Jason Park has written, produced, and directed several short films and music videos that have played at several international film festivals, including 'Teachers' starring Tatyana Ali, 'Under the Boardwalk', and 'BJ’s Mobile Gift Shop', which premiered at the 2021 Sundance Film Festival. Park is currently developing his first feature film, 'Transplant', a film he co-wrote and will direct, which was selected for the 2020 Sundance Screenwriting Intensive. He is also a 2020 Sundance Feature Film Fellow.