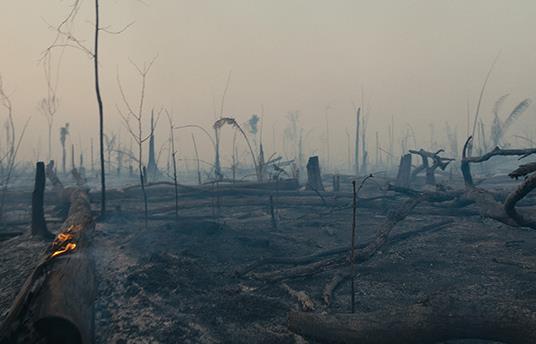 ‘The Territory’ follows the vital, inspiring fight of the Indigenous Uru-eu-wau-wau people of Brazil to defend their land from non-Indigenous farmers intent on colonising their protected territory. Co-produced by the Uru-eu-wau-wau community, the film draws on intimate access to both the Indigenous perspective and the farmers who want their land to chronicle a conflict that has profound implications for the survival of a people and the planet. The community has faced environmentally destructive and often violent incursions into their sovereign territory by nonnatives seeking to exploit the land. Illegal logging and land clearing incursions have become more frequent and more brazen over the years.

The film offers an authentic portrait of a community’s daily life and struggles. With its breathtaking cinematography showcasing the dramatic landscape, the film brings audiences deep into the precious ecosystem they are fighting to protect. With the community’s survival at stake, Bitaté Uru-eu-wau-wau and Neidinha Bandeira—a young Indigenous leader and his female mentor—must find new ways to protect the rainforest from encroaching invaders. But rather than rely on others to tell their story, the Uru-eu-wau-wau take control of the narrative and create their own news media team to bring the world the truth in this thought-provoking documentary about environmentalism and indigenous peoples’ rights.

Alex Pritz is a documentary film director and cinematographer focused on human’s relationship with the natural world. Pritz’s directorial debut, ‘The Territory’, premiered in the World Cinema competition at Sundance 2022, winning both an Audience Award and Special Jury Award for Documentary Craft, making it the only film at that year’s festival to win awards from audience and jury alike. He is a co-founder of Documist and has received grants from the Sundance Institute, IDA Enterprise Fund, Catapult Fund and Doc Society. Pritz holds a Bachelor of Science from McGill University, where he studied Environmental Science and Philosophy.