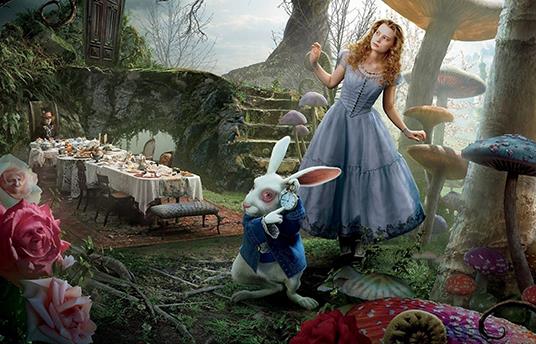 A young girl when she first visited magical Underland, Alice Kingsleigh, is now a teenager with no memory of the place—except in her dreams. Her life takes a turn for the unexpected when, at a garden party for her fiance and herself, she spots a certain white rabbit and tumbles down a hole after him. Reunited with her friends the Mad Hatter, the Cheshire Cat and others, Alice learns it is her destiny to end the Red Queen’s reign of terror.

Born in California, Tim Burton spent most of his childhood as a recluse, drawing cartoons, and watching old movies. After graduating from high school, he attended the California Institute of the Arts. His first job was as an animator for Disney. Recognising his talent, Disney gave him the green light to make ‘Vincent’ (1982), an animated short about a boy who wants to be like Vincent Price. Narrated by Price himself, the short was a critical success and won several awards. Among his many celebrated films are ‘Pee-Wee's Big Adventure’ (1985), ‘Beetlejuice’ (1988), ‘Batman’ (1989), ‘Edward Scissorhands’ (1990), ‘Mars Attacks!’ (1996), ‘Planet of the Apes’ (2001), ‘Big Fish’ (2003) and ‘Charlie and the Chocolate Factory’ (2005).